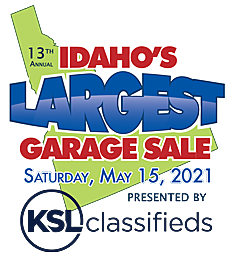 When Idaho's Largest Garage Sale returns in 2021 on May 15th, we are proud to announce that the Boise Boys will be there!

Luke is a stylistic visionary and Clint is a getter done contractor. Together they form the perfect home renovation team.

The goal has been to bring stories of restoration to our city. We love to rebuild what is broken and refresh what is worn down. It is our desire to make the communities we work in a better place to live one restored home at a time.

Luke grew up in Boise, Idaho.  Even as a young man Luke had a passion for the artistic things of life.  His talents have allowed him to express creativity through his music and design.  As a professional musician, Luke’s travels have allowed him to hone his clean and fresh design sense with a global perspective that is expressed with warmth on a wide variety of home styles and various projects.  He is most satisfied in his craft when he can repurpose or redeem a space or home for a new and beautiful purpose.

Luke married his first sweetheart, Miranda. Together they have two biological children and have adopted four more.  Luke’s joy in experiencing transformation is not limited merely to his design, but he and Miranda find their true life’s calling in the redemption of beautiful children in need of a loving family.

It was Luke’s heart for adoption that led him to realize his purpose as a designer and real estate investor.  The high costs associated with adoption required a much greater outlay than a musician in ministry could ever fathom paying.  Luke purchased his first real estate investment at auction, a run down house that needed a full overhaul. He poured a ton of love into it and sought to make it a home that he and his family would be proud to live in.  That renovated home not only provided the necessary funding for that first adoption, it simultaneously became the canvas upon which Luke began the expression of all things creative that had for years developed within him.

The rest, as they say, is history.

Clint was born and raised in Texas.  He graduated with a business degree from Texas Christian University and with a law degree from Southern Methodist University.  From a family of entrepreneurs, Clint has founded a wide variety of small businesses; and, as a business attorney and CPA, he has advised countless others in their entrepreneurial ventures.  Whether stringing miles of barbed wire on the family farm as a kid, structuring large commercial deals, or swinging a hammer on his own renovations, Clint’s true business love has always been real estate.  He carries both a contractor’s and a broker’s license to cut out the middle-man and keep him close to the action.

Clint lives for his family and he met Sandy, the love of his life, in college.  Sandy has given him three incredible boys and years of sacrificial support, love, and understanding as he has pursued his ventures.  Clint credits providential intervention for his family’s deliverance from the real estate crisis of 2008 as he was led, at the height of his construction business, to uproot and move his young family to Idaho. Shortly after moving to Idaho, Clint was selected to appear on NBC’s hit business reality TV competition, The Apprentice with Donald Trump.  Clint’s desire to test his business acumen against a field of top business competition paid-off as he finished a finalist and handily won the final competition task.  After the dust settled from his national TV appearance and aftermath, Clint returned to his love of real estate and began scouting Boise, Idaho for homes to renovate.